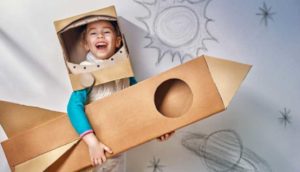 If you want to be more creative, you need to think like a child

Have you ever noticed that almost every child LOVES to color or draw pictures? There is no preconceived notion of their own abilities – most do it for the sheer joy of being creative… because it’s FUN.

When do children stop enjoying the creative process?

Several years ago I was asked to make a presentation for my daughter’s second grade class to talk about my career in marketing communications.

During the course of my presentation, I asked them how many of them like to draw or color and not surprisingly, EVERY child in the room enthusiastically raised their hand.

One little boy in the front interrupted me a few minutes later (obviously had given it some thought) and said: “I think it’s when they’re around 12 years old…”

Can you outgrow creativity?

Somewhere along the way, most children stop exploring their creativity as they grow into adulthood – for a wide range of reasons. There are plenty of articles and research on the subject. In one recent article, the theory (at least in part) is because children have the benefit of not knowing what is not possible, so to them, there are no limitations to their creativity.

My own theory is that adults have developed inhibitions and insecurity about their abilities. That fear of judgement makes the task of being creative and exploring new ideas intimidating. For instance, if you ask a child to draw a picture of the person next to them, they are proud to show it to anyone who will oblige. Most adults will be embarrassed, even apologize before showing their artwork to the person they drew a portrait of.

The imagination of a child

The impossible concept of a superhuman man that could fly was conceptualized by two youths – and the story of Superman was eventually turned into a billion-dollar franchise for DC Comics (in return for the $130 they paid the boys!).There is also a growing number of inventions and concepts that are hugely successful – and conceptualized by children… here is a small list of ten of them.

According to his biography, Edwin Land’s invention of the Polaroid Camera was conceived because of his 3-year-old daughter’s persistent questions asking why she wouldn’t see the picture until later.

In The Science of Imagination, the article states that: “…in order to think differently and problem-solve more creatively is to pretend. That’s it. Just pretend.”

Be fearless – but be playful, too

The most successful inventors, artists or innovators are the ones that don’t have  inhibitions. These innovators have mastered the art of trying new ideas without fear of how others will receive it. Most importantly, they are willing to be playful, and explore all of the possibilities (including the impossible).

Steve Jobs was a visionary who ignored the people who told him “it can’t be done.” His partner, Steve Wozniak was known for his genius in bringing his partner’s vision to life… and for his practical jokes and sense of humor (including an attempt in his younger years to impersonate Henry Kissinger and calling the Pope – getting as close as one of the Bishops at the Vatican.)

Pablo Picasso was a master of realism before he began reinventing himself, experimenting and exploring other more playful “modern” forms of art.

Thomas Edison was well-known as a practical joker – and even nick-named his first two children Dot and Dash in honor of his early telegraph days.

So, if you’re trying to create the next graphic design trend, a new app to rival “Pokémon Go”, a new invention – or just a creative new way to approach your job, you have to find your inner-child… and be fearless…

I double-dog dare you!