Prior to building the User Interface and User Experience designs for GE Dynamic Positioning Systems, I needed to fully research the process and the existing systems. This required learning more about the terminology used, familiarizing myself with the equipment and navigation tools already available, and researching how exisiting navigation systems worked and looked.

After gaining a more complete understanding of the system thrusters, the effects of sea forces, wind forces, warning systems, weather, engine force, heading … and mariner terminology, the process of building the system could begin. 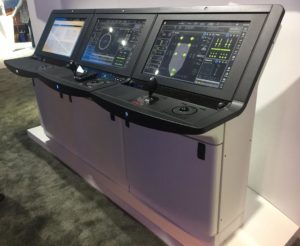 GE was a leader in developing Marine Navigational Systems since the 1970’s, but they wanted to develop something new – integrating a touch-screen functionality, that would allow for easy access to all of the navigation system screens easily and intuitively.

The GE research team conducted several focused surveys of several large marine vessel captains to evaluate the effectiveness of different color combinations for both day and nighttime lighting, iconography to replace/reinforce text labels – even the positioning and order of the many options available on the screens.

Working with the researchers I was able to develop wireframe layouts for continued research of the User Experience Design.

After several rounds of adjustments and user research and input, the final User Interface and Visual Design process was begun.

The use of icons helped reduce the confusion of translating text in multiple languages, and made it easier to find and navigate through the many screens. Options for both daytime and nighttime views were developed to eliminate screen glare in any lighting situation, and an intuitive touch-screen interface was developed to easily collapse and expand the information that was most important.

After several rounds of refinement of the User Interface Design, a high-fidelity prototype was developed for User Testing, which resulted in immediate pre-orders for the final product. My designs for the new GE Marine Dynamic Positioning HMI i(Human-Machine Interface) are now an integral part of naval, commercial, and off-shore marine vessels.